If you are looking for an unfussy, minimalist and elegant shower cap then Diva White is for you. Wear it with a swimming costume at the spa for a sleek and sophisticated look. Very understated, very flattering, very Marilyn Monroe. Please note this turban is not designed for underwater swimming.

Our shower turbans are:

I have recently turned 50 and doesn't my previously thick and smooth hair know and show it! Swimming has become a nightmare. Swimming hats? Nope, they don't seem to work and the water just rises up into my hair..........plus I look an absolute idiot wearing one, with wet frizzy hair at the end of it!

So, I decided as a shower cap works in the shower, why not for swimming? I have now used my turban in Spain (40+ degree temperatures, not ideal for my new unwelcome frizzy hair) and can report back that the turban has liberated me in the pool.

I consider myself to have a head on the bigger side but the standard size was plenty big enough. In fact, I found it not as tight as my usual shower cap. To remedy this, I used a towelling hair band (as I do with my shower cap, to keep hair back) and found this worked really well, when tucked in under the turban, it absorbed any wet that leaked in around the nape of the neck and didn't let it seep up any further.

I used the turban every day on holiday and it did not leak. Ok, I felt a bit of a wally initially walking in to the pool but that soon stopped once I was in the water and not having to avoid kids splashing and feeling confident to go for a sedate front crawl (full on breast stroke is out of the question, for obvious reasons). I was put off by the price initially but now have no regrets and I am glad that I made the investment.
I chose the white deliberately, as I did not want to feel too hot with the turban on but this was not a problem, even when in the pool for almost an hour and in 40+ degree temperatures, I did not feel overheated.

In summary, if you are going to go for a serious swimming session, I'm ot sure this would keep hair bone dry. But pottering about in the pool, breast stroke and keeping head out of the water, this was splash proof (and there were quite a few lads bombing in the water, I was coverd in water a fair few times) and kept my hair dry. I am one very happy customer and won't avoid the pool again. Thank you Dilly Daydream x

K
Kerry F.
The supplier really helped me out in getti...

The supplier really helped me out in getting this to me very quickly for a surprise spa break. Very lovely lady. Top quality product, feels very comfy. Thanks so much 💕 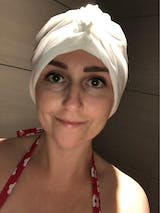 J
Julie B.
Really nice and comfortable. Like it.

Perfect, fits well and I'm using it for overnight hair masks, it's comfortable to sleep in! Arrived quickly, highly recommend!